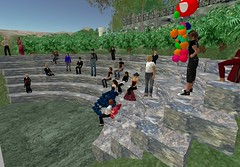 coventry_013
Originally uploaded by Shirley Williams.
It is an expression we use in the UK when referring to somebody you intend to collectively ignor. Not a great experience for the victim - the effective absence of communication with other human beings, but a good when of getting the point across with those of an anti-social disposition. It is oddly the option one takes in Second Life to handle griefers more often than not - active protest usually encourages them more.

I digress. More to the point, the Coventry educational opening today in Second Life was missed by yours truly, largely because my Facebook diary neglected to realise I live on SL time. This, an opening early evening in the UK was mis-interpreted as late night in Second Life. Bah humbug! My apologies to those to whom I said I would attend.

This picture was just posted. It seems the venue filled up rapidly and according to the photographer as packed 15 minutes after the start. Did I say "start"? Seems none of the organisers had actually turned up at that point and the crowds were left a-waiting.

Now what was I saying about being "sent to Coventry"?

This video is about managing a data-center in the real world from within Second Life.

The idea was to use Second Life as the user-interface for an openQRM-server, which manages the servers in a lab.
They created a bridge between Second Life and the real world to map and connect virtual objects in Second Life to real objects (e.g. servers).
The video show basic monitoring and administrating actions in a virtual data-center within Second life. The mapped virtual objects are real, physically existing servers in the lab.

NASA CoLab is a Collaborative Space Exploration Laboratory being developed at NASA. CoLab will provide a framework for exciting partnership projects between the nation's space program and the thriving technology-entrepreneurial community.

In addition to the benefits to collaborating with intellectual assets of the technology business sector, the general public will benefit through various projects supporting the NASA's goals.

CoLab will feature a physical space in downtown San Francisco, a collaborative online space where scientists and engineers from NASA will collaborate with the entrepreneurial technology community, and a space in "Second Life", a virtual learning community with interactive content.